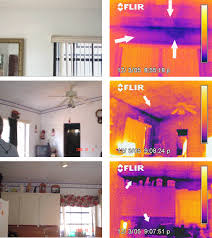 An infrared (IR) camera is a versatile, lightweight and cutting-edge device that can enhance an inspector’s understanding of a building’s different systems and components.  The infrared cameras ability to read heat as color and then display that information in a way that’s easily understood by homeowners and other clients makes the IR camera an increasingly important tool for inspectors to have in their equipment arsenal.

Infrared cameras translate the heat signatures of objects into colors on a gradient scale, with higher temperatures appearing as lighter colors, and lower temperatures and wet areas appearing as darker colors.  Also known as thermal imaging and thermography, IR technology captures the light that exists just outside the visible spectrum.  Thermal images show surface-heat variations, which is why an IR camera is such a diverse tool for commercial and home inspectors that can be used for a variety of applications.  Abnormally hot electrical components and connections can be viewed during an electrical inspection.  Areas of moisture that may lead to leaks and structural damage can be located based on apparent temperature differences.  Heat loss and air leakage in a building envelope, and even areas of insufficient insulation, can be pinpointed quickly and accurately during an energy audit.